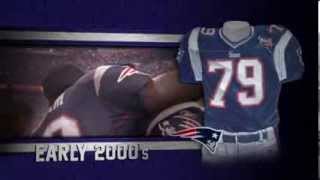 If you love the New England Patriots and their colorful history, then you’re going to love this terrific two-minute video by NFL Films which chronicles the uniform color history of the Patriots franchise from its founding in 1960 as an original member of the upstart AFL to the modern era of almost unparalleled success. Narrated by Scott Graham, one of the great voices of NFL Films, this video features three uniform history experts: Joe Horrigan who is VP Communications and Exhibits at the Pro Football Hall of Fame where he has worked for more than 35 years; Michael MacCambridge, author of “America’s Game: The Epic Story of How Pro Football Captured A Nation” and many other books as well as editor of the massive “ESPN College Football Encyclopedia”; and Scott Sillcox, sports uniform historian.

If you are a huge Patriots fan, you might be interested to know that the 15 pieces of original artwork used to create the Patriots’ famous uniform evolution poster — the actual hand-painted watercolor paintings — are available for sale at Heritage Sports Art http://www.HeritageSportsArt.com . When you watch this NFL Films video, you will see 4 of the 15 actual painted uniforms — and you can actually own that original artwork!