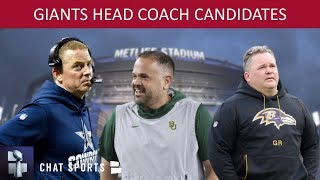 Pat Shurmur is yet another NFL head coach to be fired after the New York Giants completed their 5th season with double-digit losses in 6 years. Shurmur is 9-22 with the Giants, so when it comes to finding a replacement, it can only go up from here. Giants rumors have been linked to Jason Garrett and Matt Rhule, who are both part of our top 11 targets to replace Shurmur in 2020.

There are some notable coaches John Mara and the Giants could hire, including Greg Roman, Nick Saban and Josh McDaniels. Could the Giants offer enough to lure these coaches away from their winning teams?

Stay up to date on the latest Giants news & rumors but SUBSCRIBING TO CHAT SPORTS ON YOUTUBE: https://www.youtube.com/chatsportstv?sub_confirmation=1

The Giants primary focus is transitioning from Eli Manning to rookie QB Daniel Jones. Greg Roman has had success with Lamar Jackson and could maximize Saquon Barkley to take pressure off of Daniel Jones. Mike McCarthy also has experience with QB transitions, having developed Aaron Rodgers after Brett Farve retired.

Should Mara choose to take a risk, be on the lookout for Dan Campbell, who is currently the Saints TE coach. Campbell played for the Giants from 1999 to 2002 and has drawn interest from Cleveland Browns, Arizona Cardinals and the Green Bay Packers. Don’t count out Matt Rhule, who also has ties to New York thanks to his brief stint as the assistant offensive line coach in 2012.

You can catch more NFL coverage from Chat Sports on Facebook at: http://www.facebook.com/chatsports

Giants fans can keep up with the latest on the coaching search on our website as well: http://www.chatsports.com/New-York-Giants/

For news, stats and scores personalized to the teams you follow, download the Chat Sports app: https://www.chatsports.com/app